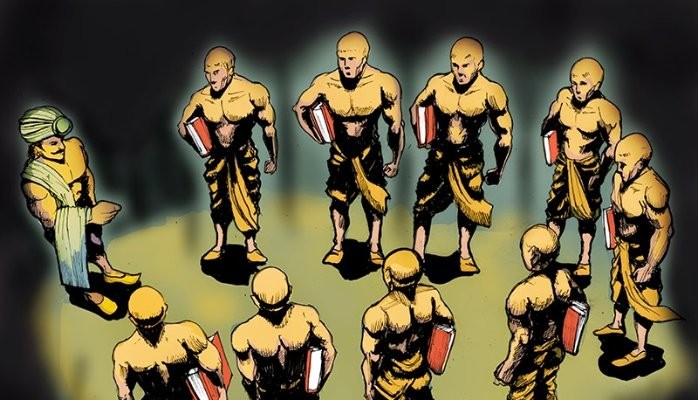 The world is full of wonders and marvels that have never failed to leave people inexplicably puzzled, whether it is a secret society that works behind closed doors such as Illuminati or something as perplexing as the Bermuda Triangle. There are several unexplained mysteries in the world, as today we will try to shed some light on a very mysterious story of Emperor Ashoka’s secret society that may or may not is controlling the world today.

Chandragupta Maurya’s grandson, Ashoka, was the third ruler of the illustrious Mauryan dynasty. He reigned between 273 BC and 232 BC and took the empire to its greatest geographical extent and its full height of power. His Empire comprised most of India, South Asia, and beyond, stretching from present-day Afghanistan and parts of Persia and the west to the Bengal and Assam East and Mysore in the south.

In his initial ruling time, they documented Ashoka as the cruelest and the most ruthless ruler, but later he became the most benevolent king after experiencing a gruesome bore at the Battle of Kalinga. We consider his glorious time as the most prosperous time in the history of India. They also gave him the title of “Devanampriya Priyadarshi” which means one who looked upon others with love. Embracing Buddhism was one of the greatest turning points in Emperor Ashoka’s life. The Ashoka Stambh has lions roaring in directions and has always been the Emblem of the republic of India. Above, we summarize the reign of Ashoka.

Now we will move forward to the story of Ashoka and his nine unknown men. So the nine unknown men were to India as Illuminati is to the western world, but only more intriguing and mysterious. After Ashoka’s dramatic transformation of heart in the Battle of Kalinga, he realized as a true king he must win the people’s hearts instead of cities. This took him on the path to Buddhism. He realized that power can lead to the extinction of this world. Which can be lived in peaceful days? He swore off violence forever and thus created the society of the nine unknown men after 226 BC.

He gathered nine brilliant minds in India and they gave each of these nine men tasks and responsibilities of developing, preserving, and preventing secret knowledge from getting into the hands of the unknowledgeable. They did not make the identities of these men public. Ashoka feared that if the scientific technologies in his time got into the hands of the wrong people, they would have used them for destruction. They were each given a specific book that they were to update, revise and ultimately perfect the knowledge. It was said that if one member could not complete the book or wish to retire, then he could choose his successor, but the number of these men should always remain nine.

We believe these books to have comprised supreme knowledge, even the unimaginable secrets of antigravity and time travel. The world learns about the existence of the nine men from an English writer, Talbot Mundy’s book ‘The Nine Unknown Men’, in 1923. Mundy, in his book, explained that the members constantly updated the book and shared the knowledge of wise men of different fields in the world for the greater cause of humanity. The nine books were: Propaganda- the first book dealt with the techniques of propaganda and psychological warfare.

This was the most dangerous of all, as it taught how to manipulate the opinion of the masses. This book could have altered the thoughts and have made anyone govern the entire world; Physiology- the second book discussed physiology, which explains how to kill a person simply by touching. We know it like the touch of death, where a person can be killed by touching a nerve pulse in his body. We believe that the Martial Art and Judo result from leakages from the second book; Microbiology- the third book dealt with biotechnology and microbiology. We believe that the Cholera vaccine came from the knowledge that was kept in this book; Alchemy- the fourth book focused on Alchemy and transmutation of metals.

Mundy supported his theory by stating one time wherein severe drought temples and religious relief organizations received large quantities of gold from a secret source; Communication- the fifth one enlightened the reader about communicating with the terrestrial and extraterrestrial. They concluded that the nine unknown men were aware of the alien presence; Gravity- the sixth one spoke the concept of ‘Vaiminika Shastra’, or the art of building spaceships or UFOs.

It contained the secrets of gravitation and instructions on how to build an anti-gravity flying machine known as a “Vimana”; Cosmogony- the seventh one was about cosmology, the matter of the universe and the secrets of time travel; Light- the eighth one could teach the reader how to control the speed of light and use it for our advantage. This book explains how to change the speed of light to use it as a weapon; Sociology- the ultimate book discussed sociology. It would speak of the evolution of humans, the evolution of societies including their downfall. It contained ways to create, nurture and destroy an entire culture or civilization.

Surely, the books appeared to be the ultimate source of all the knowledge known to people, and perhaps they sound too good to be true. But were the nine unknown men real? We cannot say for sure. According to the legends, these nine men leaked information from time to time from that book to save people from destruction. There’s no proof that they existed but there is also no proof that they don’t. Maybe Ashoka’s nine men are watching over the world or maybe this is just a fascinating story to keep us intrigued. Whatever it is, society is definitely in need of some savings.