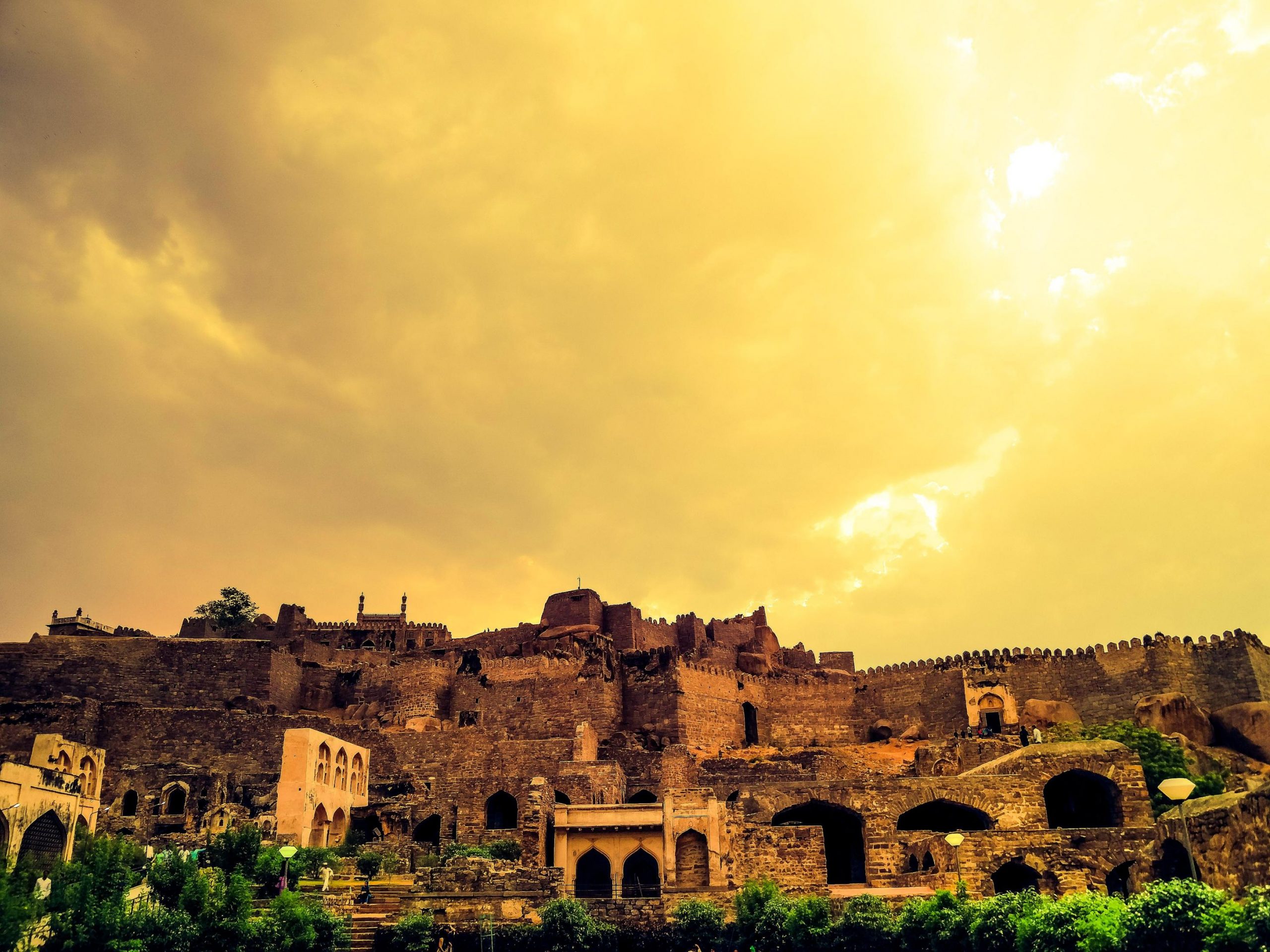 India is a country, a land with great heritage culture. Some ancient forts and monuments contain the story of the royal bygone eras. Speaking of forts, let’s talk about undoubtedly one of the most magnificent fortresses of India – The Golconda Fort.

The Golconda fort was inbuilt in the 13th century by the Kakatiya dynasty. They have initially known it as ‘Mankal’ and is in the western part of Hyderabad, Telangana, India. They also spelled Golconda as Golkonda (Telugu: shepherd’s hill) because it is a rumor that it is during the Kakatiya empire when a Shepherd boy came across an idol of God on the site. It was originally a mud fort which was later transformed into an imposing citadel during the 16th to 17th century by the Qutb Shahi dynasty.

It was the capital of the Qutb Shahi dynasty till it fell into ruin in 1687 and after eight months, siege into the hands of the Mughal Emperor Aurangzeb, and Golconda was annexed to the Mughal Empire. The territory of Golconda is in between the lower reaches of the Godavari and Krishna rivers and extends to the Bay of Bengal.

They made the forts of granite at the top hill. The height of the Fort is approximately 400 feet and is about 9 km from the Hussain Sagar lake. The Fort occupies an area of three square kilometers. The surroundings spread across 11 km of the total area. Bala Hissar Gate is the main entrance to the Fort. We believe that there are secret tunnels and escape routes. The tunnel begins at the ‘durbar halls’ and leads to one palace.

The escape routes were for the royals, but since then they have not found it. The Fort has Mahakali Temple on the top and can be seen from the king’s room which is on the top of the Fort. The Fort comprises four forts with a 10 km outer long wall. There are 87 semicircular Bastin mounted with cannons, eight gateways, four drawbridges and are in total of 720 steps. The fort also comprises royal apartments, mosques, temples, halls, etc.

Gates or Darwaza at Golconda fort

Golconda Fort has eight gateways, and the main is Fateh Darwaza or Victory gate. They built the gate to commemorate the march of the Mughal Emperor Aurangzeb. The other gates are Banjara Darwaza, Bala Hissar Darwaza, Mecca Darwaza, Yali Darwaza, Moti Darwaza, Patancheru Darwaza, etc.

By the 17th century, Golconda was famous as a diamond market because of the vicinity of diamond mines, especially the Kollur mine. India was the only known diamond mine in the world. It flourished as a trade center for enormous diamonds known as Golconda diamonds. Golkonda produced many famous diamonds like ‘ Koh-i-Noor’ and ‘Hope diamonds’ along with the others such as Daria -i-noor, Noor-ul-Ain, Orlov, Princé and Regent diamond and some long-gone diamonds like Florentine yellow.

This tree is over 400 years old and is the largest baobab tree on the premises of Naya Qila, which extends the Golconda Fort. The spread out of the tree is so vast that it looks like a huge elephant foot. The Arab traders who gifted it to the Muhammad Quli Qutb Shah introduced the tree. The width of the tree is 27.40 meter. Trespassers may not visit with no permission as the entire Naya qila has been under the control of Hyderabad Golf Course. Presently the tree is shedding and drying out, it is one attraction of the Golconda Fort.

The sound and light show

Another most interesting thing that attracts a lot of crowds is the sound and light show. It shows the history associated with the fort. The viewers enjoy these shows in three different languages, i.e. Telugu, Hindi, English. They organize the show in the area around the Rani Mahal.

‘ Taali Maaro Miyan’. It is said that if a person claps their hand at the entrance, then it can be heard at Bala Hissar, which is the highest point and almost a kilometer away. It attracts every visitor. This trick was an effective way to secure the fort during those days. There are other attractions also which one can witness, such as Hathi Rath, The Oil Store House, The Dhaan Kotha, Masjid Mustafa Khan, Curtain Wall, Nagina Garden, Durga Devi Temple, and even Kaali Temple.

The Permanent Delegation of India submitted the Fort to UNESCO for considering it into World Heritage Sites. Golconda Fort allures every visitor with its unparalleled beauty and serves as a fine example of magnificent architecture. It epitomizes the ‘Nawabi’ Culture. This fort with the existence of over 500 years is India’s one of the outstanding citadel. Even with the ruins, the fort still rings the stories of yore.