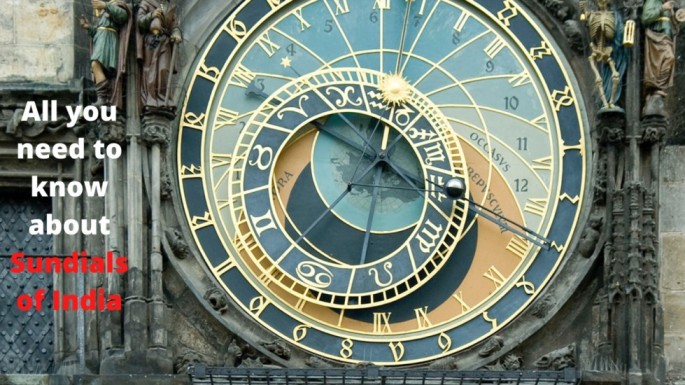 In ancient times there were no clocks so the people used a sundial to know what time it is of the day. Primarily, the observatory was used to compile astronomical tables and to predict the times and movements of the Sun, Moon and planets using the satellite and the position of the Sun in the sky, with the help of dark shadow caused by a pointed piece of metal between the sun and the clock surface. There are mainly six sundials in India, five of them are called Jantar Mantar which situated in five different cities in India and one of them is an Orissa. The name Jantar is derived from the yantra Sanskrit word meaning “instrument machine” and mantar from also a Sanskrit word for “consult, calculate”.

Therefore, Jantar Mantar means “calculating instrument”. It was built by the Rajput king Maharaja Sawai Jai Singh II of Jaipur from 1724 to 1735. He built such observatories at different locations of the country: Jaipur, Delhi, Ujjain, Varanasi and Mathura. The astronomical observatory located at Jaipur features to be the world’s largest stone sundial. This used Complex of 14 devices was enumerated as a World Heritage site by UNESCO as it attracts architects, mathematician, geographers, and historians. Considered to be the largest observatory is in the world, this comprises huge and interesting stone structures that help to interpret the position of celestial bodies and calculate local time.

Among the five observatories, the one in Mathura is almost in ruins now. In the 18th century Maharaja Sawai Jai Singh II started to focus on science, he had mastered five languages in his time including Arabic and Sanskrit. And while the rest of India was busy fighting for land, he looked at the night sky and tried to find some logic behind this magic. The king was passionate about mathematics and astronomy and started his scientific pursuit by studying The Islamic School of Astronomy. He borrowed some elements from the Greek and Persian observations. The observatory at Jaipur consists of 14 geometric devices for measuring time of the day, heights of heavenly bodies, predicting eclipse and locations of constellations.

The Maharaja invited astronomers from different countries to share ideas and discuss our place in the universe. At that time they used brass instruments for observations of the celestial bodies but they weren’t very accurate. Jay Singh saw the larger picture and wanted to build something big that is timeless and can measure things with perfection. Jantar Mantar’s stone monuments are considered to be more accurate than others. The Samrat Yantra is one of the biggest time measuring instrument in Jaipur. It is not an ordinary shadow casting machine, it is more accurate than the average clock. The Samrat yantra divides each hour into 4 blocks of 15 minutes each. Each 15 minutes block is further divided into smaller blocks of 1 minute. Each one minute block is subdivided into 10 parts which means 6 seconds.

It is among the five observatories and is also built by the Rajput King in 1724. Painted and red, the Jantar Mantar in Delhi comprises 13 astronomical instruments and the most important of them are- Misra Yantra, Jaiprakash Yantra, Samrat Yantra and Ram Yantra. This 723 ft. tall observatory and its instruments have been mended and fixed over the years. Based on the ancient Egyptian. Ptolemaic structure this sundial addresses the following celestial orders: the equatorial, the ecliptic, and the horizon- zenith in a local arrangement. Also called the Vedh Shala Observatory, the Jantar Mantar in Ujjain was established in the 17th Century by Maharaja Jai Singh and renders the same features of astronomical calculations as the rest of the observatories in Varanasi and Mathura.

Moving forward to vi sundials in a list which is located in Orissa’s Konark Sun Temple. The sundials are actually in the form of wheels in the Konark Sun Temple, which calculates time accurately to a minute including day and night and it shows time in an anticlockwise direction. Built-in 1250 AD, the temple is attributed to king Narasimha Deva I of the Eastern Ganga Dynasty about 1250 CE. The temple is a classic illustration of the Kalinga Architecture, which is also named the Surya Devalaya.

A spectacular specimen of astronomy from the past, The Jantar Mantar and The Konark Sun Temple doesn’t fail to impress even in this age. Let’s hope we admire and preserve what we have now but at only possible if we start respecting our knowledge.